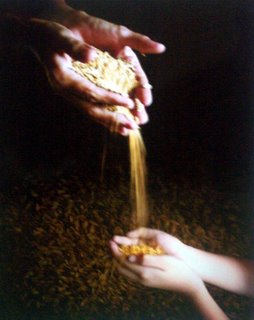 Lately I’ve been thinking about this notion of being a co-heir. It got my motor going during Thursday bible study as we were studying Romans and Ephesians. A sermon a week or so ago ignited it again as Mike taught on God as the Father.

This inheritance is not something that I share with Jesus as a portion.

This inheritance is not something that I share with other believers as a portion.

About 12 years ago, I was contacted by an attorney I did not know informing me that my brother, sister and I had inherited our grandmother’s portion of a piece of property. The distant relatives (I didn’t know even existed!) had been trying to find us because they were selling the property.

Overnighted paperwork arrived for signatures. My sister and brother and I called each other on the phone, dreaming about how we might spend our windfall. We giggled. We fantasized. We had grand ideas of how we would spend our fortune.

A few days later another overnight envelope brought the closing papers and a check with my name on it.

A big let down! I had such dreams!

I always think of this when I imagine sharing my inheritance with others. While it is how it works in our human economy, God’s economy is very different!

We don’t share by the portion, we share in the whole. All of it belongs to the believer.

“Praise be to the God and Father of our Lord Jesus Christ, who has blessed us in the heavenly realms with every spiritual blessing in Christ. For he chose us in him before the creation of the world to be holy and blameless in his sight. In love he predestined us to be adopted as his sons through Jesus Christ, in accordance with his pleasure and willâ€” to the praise of his glorious grace, which he has freely given us in the One he loves. In him we have redemption through his blood, the forgiveness of sins, in accordance with the riches of God’s grace that he lavished on us with all wisdom and understanding. 9And he[d] made known to us the mystery of his will according to his good pleasure, which he purposed in Christ, to be put into effect when the times will have reached their fulfillmentâ€”to bring all things in heaven and on earth together under one head, even Christ.

In him we were also chosen, having been predestined according to the plan of him who works out everything in conformity with the purpose of his will, in order that we, who were the first to hope in Christ, might be for the praise of his glory. And you also were included in Christ when you heard the word of truth, the gospel of your salvation. Having believed, you were marked in him with a seal, the promised Holy Spirit, 14who is a deposit guaranteeing our inheritance until the redemption of those who are God’s possessionâ€”to the praise of his glory.” Ephesians 1: 3-14