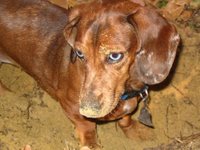 Last summer we fought the battle of the mole.

Early in the summer Dora Mae, (head of homeland security for our property) set up camp and patrolled the backyard on extra duty. She had detected covert operations and was determined to rid the yard of their presence. While we had no idea in the first few days what was going on, Dora had unearthed tunnels and sat, ready to grab, with her head stuck into one end of a hole.

She would wake up on the morning, ignore her bowl of breakfast, and head outside. She would camp for a long time, watching for activities and would only come inside for water and food when she could no longer handle starvation.

I would watch her from my breakfast table as she dug and dug and dug her way across the yard, chasing the varmits. Chasing univited guests is her job.

/sidenote
Dora is extraordinary at her position as head of homeland security. She has caught and killed snakes, birds, a field rat, lizards, bugs of all shapes and sizes. She takes her job very seriously as she protects the family she loves. We know we are safe and secured when Dora is on the job.
/end sidenote

When we finally realized that the object of her interest was a mole or two, I called the pest guys who take care of our yard and home. They sent a mole specialist who happened to be a grown-up ex-student of mine. He surveyed the damaged caused by the mole with Dora Mae in hot pursuit and admitted he couldn’t do anything to help. It seems that Dora had uprooted the backyard to such an extent that there was no way to find a tunnel to set a trap. I had to agree. Dora had dug up the entire backyard. He did think that the moles wouldn’t be able to stay and would probably be gone soon since they would have no way to stay inside their tunnels. Dora had done her job, he said.

And so, last summer, we fought the battle of the mole. Dora had won.

And this year (although very late for their arrival), they are back in spite of our treatment for grub worms. The only good thing about it, is that they have stayed in the front yard this year and have not attempted to tunnel into the backyard. Its a good thing, too. The grass has finally grown in back there.

I actually saw a mole a day ago, coming out of one of the holes in our neighbors yard. He is an odd looking critter with huge feet/claws. How odd of God!